PWR’s have just released our already popular universal Transmission oil coolers in "kit form". The kit consists of a 3/8 barb Tansmission cooler (4 sizes available) clamps, hose, adapter fittings and zippers in a ideal display/point of sale box ready to sellThese PWR Patented dimpled design universal plate and fin Tranmission oil coolers are made of a full Aluminium construction that allows the coolers to be lightweight, compact and rigid while offering a high corrosion resistance. The patented dimple plates re-direct the oil flow. and in conjunction with the unique louvered fin design provide highly effecient cooling with low-pressure drop.PWR plate and fin transmission coolers are manufactured in 19mm core size for race and street applications.* High heat transfer design* Low pressure drop due design configuration* High corrosion resistance* Factory look with PWR design elements* Revolutionary fin pitch and louver angle* State of the art controlled atmosphere brazing process* Flexibility of custom designs exactly to your needs* Hi tech “Auto CAD” design division* Race proven performance* Full time R&D department* Guaranteed up to 80psi* 1 year warranty* 100% Australian madeI want an oil cooler for my street car. What’s a common cooler to suit my needs?There are two main types of oil coolers made by PWR;* ‘Plate and Fin’ &* ‘Tube and Fin’What are the features and benefits of Plate and Fin and what are their sizes?P&F oil coolers are made in two basic groups – 19mm and 37mm plate widths. P&F is the lightest in construction and most efficient oil cooler relative to its area. The PWR P&F cooler is one of the most intricate designs on the market featuring dimpled plates and louvered fin. Light efficient yet strong construction.Where are these 19mm Plate and Fin cooler commonly used?Often used in transmission, power steering and differential cooling in road or race applications and also seen under any V8 Supercar. Also used in some small engine oil cooling applications.Can I buy auxiliary engine oil coolers?Yes, the P&F 37mm plate and fin cooler is used for this purpose and is also very efficient relative to its area. Plate widths have been increased which gives improved capacity and increased flow. These coolers feature a complex internal turbulator for added efficiency and strength.Where are these 37mm Plate and Fin Coolers commonly used?Mainly used in engine oil cooling on modified street cars, tarmac race cars and any application with clean air.What’s meant by the Term “In-tank” oil cooler?In-tank oil cooler refers to an arrangement where the plate and fin cooler is fixed (bolted or welded) inside a radiator tank. The submerged cooler uses the engine radiator water to cool the oil. This is often done on Original Equipment (O/E).What’s the difference in ‘In-tank’ oil cooling opposed to ‘External’ oil cooling?In-tank P&F coolers offer more rapid, effective cooling relative to its area.In-tank doesn’t rely on constant airflow. We can often see these coolers put to good use in low speed applications where airflow is limited. Another added advantage is often reduced oil cooler line length.What size are these In-tank oil coolers and what is best suited to my application?Available in:• 37mm as mentioned designed for In-tank transmission cooling.• 45mm designed for Engine oil cooling of Engines of anything other than full race.• 65mm designed for Engine oil cooling of Engines destined for race applications.What are the features and benefits of Tube and Fin?Due to the construction method, T&F has the luxury of being able to be made in virtually any core dimension! A cooler can be requested as small as 50x50mm, right up to 1m Square!PWR T&F is a very robust construction, yet returning high efficiency, high internal flow as well as a high rate of ambient airflow. All this with a very low ‘pressure drop’ (excellent for coolers down stream such as the radiator).T &F also has the luxury of being made in virtually any tank design, shape or size. Outlet fitting size, position and angles are also virtually unlimitedWhere are these Tube and Fins commonly used?Often used in Engine Oil cooling such as O/E rotary engine, off road applications (where high amount of debris may be present) and industrial applications. 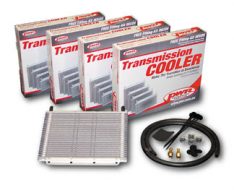