The characteristic of engine changes a lot. The following factor, collector capacity corresponding to displacement volume, the form of a serge tank, length of intake port, and section of intake port etc. The JUN GT SURGE TANK pulls out the performance required of engine as much as possible in consideration of these factors.Capacity of surge tankSince a stock surge tank is not taking into consideration the increase in an output by tuning, it may become the shortage of capacity. If the capacity of a tank runs short, good air distribution in each cylinder will become difficult. However, if capacity is too large, it will be hard coming to obtain the inertia boost effect that sends air into each cylinder using pressure change. That is, if the capacity of a collector tank is too large, pressure change of each part will become mild. The capacity of a highly efficient surge tank is made in consideration of the above-mentioned point. The difference of inhalation efficiency could take in the difference in the high rotation region which appears greatly.Form of the surge tankIt is important for the form of the surge tank to design so that it may lead to the funnel of each cylinder, without decreasing the movement energy of the air near an entrance. Many of stock surge tanks have a thick form. Although it is considered that it is likely to be easy to pass along air since appearance is thick, movement energy changes to disorder of a whirlpool etc. on the way, and, as for it, cannot keep a proper flow to a back end. By making it taper form towards a back end from the entrance of a tank, air can be passed smoothly, without reducing the vigor of a flow. Furthermore, the inertia boost effect can be heightened by removing useless capacity.Form of the funnelIt is important to pass the flow of the air in a serge tank, in the optimal condition for the funnel of each cylinder. As for the inside of the stock surge tank, the branch to each cylinder has not projected. This type with which the hole is opened on the side of a tank is almost the case of a stock. The efficiency of the funnel does not improve, even if the upper air is made easy to inhale. Because in practice, since air is inhaled according to a pressure difference, the air not the upper part of the funnel but near the entrance is inhaled. Downward air (nearby air) can be efficiently taken in from a funnel entrance by making the inside of a tank into curl funnel form. High inhaling air efficiency is realized.Application List* SR20DET (R)PS13 (11.0mm)Product NotesThe delivery pipe for (R)PS13 is contained. Because a stock injector cannot use, please prepare top feed injector. There are three kinds of diameters of a fuel delivery pipe(10.5mm 10.8mm 11.0mm). Please specify according to the injector size to be used.A throttle body used for this kit, it use a processed Nissan stock parts (for Infinity). 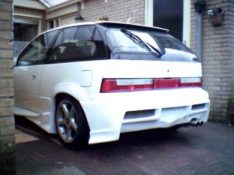